Since my mom is letting us use her Cricut Expression and her hand held Gypsy that works with it, we decided to make some Vinyl cutouts for our walls.  We allowed the kids to pick whatever they wanted to put on the walls, but we all agreed that we wanted verses and sayings that reminded us of the Lord.  I had never created vinyl wall hangings or even seen wall hangings put up before.  Though I have seen them on other peoples walls, and I’ve really enjoyed them.  I did know it would be a pain to put them up letter by letter, but with they Gypsy, I could ‘connect’ the letters, so it should be easier.  Ahhhh, ‘should be’ that is the operative words.  😉  😆
This first picture is the blank area on the wall where Sarah wanted her first verse.  The tenant’s before us painted the words Girls Rule on there.  To paint over it, we would have to paint the whole wall, something we don’t want to do.  So for now it will stay.  But Sarah is going to create a pretty rainbow picture that we will put over it to cover it up.  But for now, you can at least see the vinyls we did. 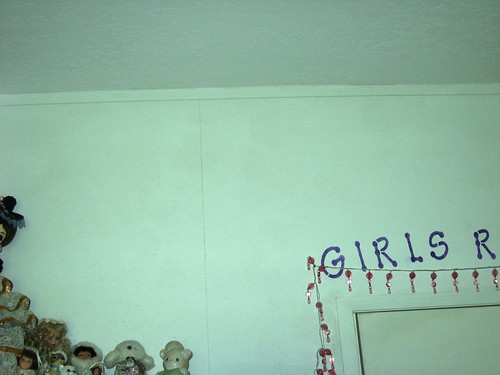 I got to work lightly taping the words up so we could make sure they were positioned right. 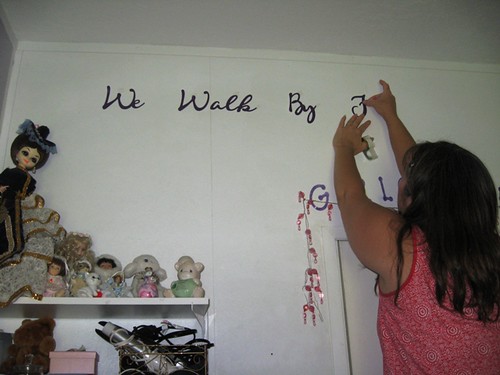 As I worked with the words, I realized even though most letters were connected, it was still going to be far more trying that I expected. 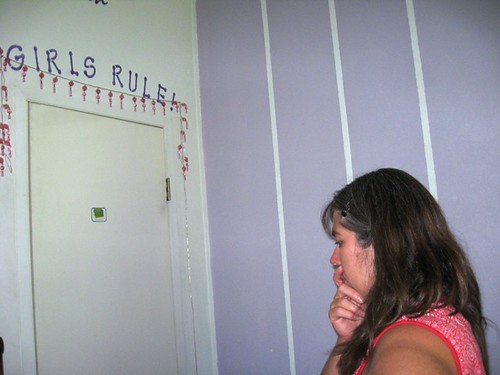 Well there wasn’t much else to do but to just get to work and do it. 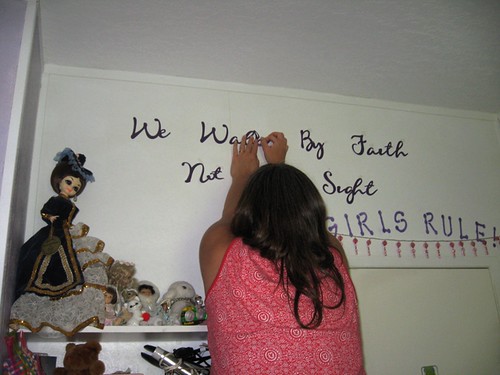 After all was said and done, it turned out pretty well. 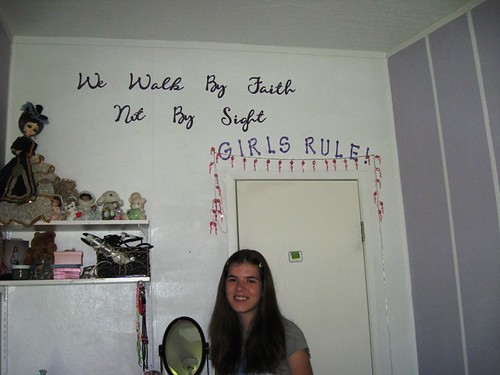 Now, I must mention that when I ordered the vinyl they sold something called ‘transfer tape’.  I bought 1 sheet of it, even though I had about 5 sheets of vinyl, thinking it was reusable.  But truthfully I just didn’t understand how it would work.  Well it does help when you watch the ‘how to’  videos.  After the time it took to put up these words, I decided I needed to watch the video.  Oh my, so much easier when you do it right.
So the second verse she wanted up we designed completely on the Gypsy, exactly how we wanted it to look on the wall.  Then using the circut like they said, we cut it out and used the transfer tape. 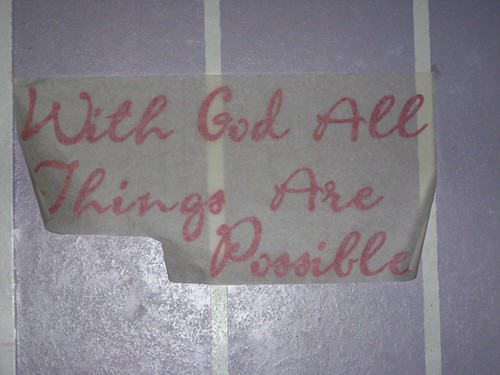 You wouldn’t believe how much easier it was with the transfer tape, and obviously so much quicker.  😀 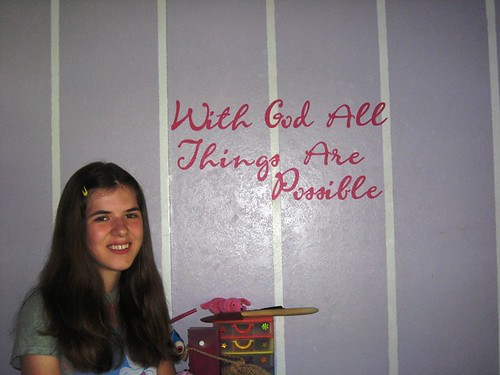 This is what Paulie created for his wall.  He wanted to play with the Gypsy while Sarah and I worked on her room.  He came up with this, and I thought it was great.  It’s hard to tell from the picture, but those things on the bottom are dogs with party hats on.  Paulie loves dogs. 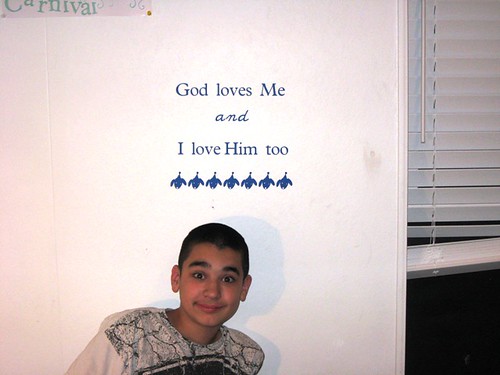 So after I put Paulie’s up, I had to stop.  I ran out of transfer tape, since it wasn’t re-usable, and didn’t get any ordered quick enough on Friday.  I’ll have more tomorrow, and we’ll finish up within the next couple of days.  But there was no way I was going to do it again without transfer tape.
It’s been a blast using my mom’s cricut machine, and I am bummed that my time with it is almost up.  My sister gets it next, in a week or two, and then my mom is back from her vacation.  I can use it whenever I want, but it’s an hour drive to her house, so it’s not going to happen often.  I would like to make some cutouts of other things for scrapbooking and cards, but I just can’t think of what to create.  I’m the type that creates while I’m doing it, I really can’t think ahead of stuff to just have on hand.  So I’ll finish up the wall hangings, maybe make some simple cutouts, and give up the machine.  So wish I could do more with it, but I am thankful for the time I’ve had to use it.  And blessed we get to see God’s Word all throughout out house.  🙂