Is it really August 7th already?

It has been a busy, fun, relaxing, busy, enjoyable, rushed, restful summer.  And yes, I planned on saying busy twice.  😉   But I also can’t believe it’s about time to start up school.  As I sit here writing this, I really should have my planner out and start working on Paulie’s school schedule for the  year.  I’ll probably start that when I’m done.

It feels strange this year.  Sarah will be 18 in 5 days!  Though she has enough credits after 3 years of high school to graduate, there are still 2 courses she needs to take, and 2 that she wants to take.  But there is a good chance she’ll be done around January or February.  And being that she is almost 18, we’ve left her whole schedule up to her.  She has seen me make our school schedule every year, so she is pretty confident on making her’s herself.  Actually, she has already started school!  She really does like school, and started it a week or so ago.  Only doing it when she feels like it, but it will put her that much ahead come next year.

So that means I am mainly responsible for Paulie this year.  His is the only schedule I need to work on.  It feels so strange.  I know next year, when I really only have one child left in school will feel really odd.  But this year feels odd too.  Knowing that all I’ll be doing for Sarah is grading one or two things, and mainly putting her grades in the grade book.  Times are a changin’  😀

But I’m enjoying this time with my kids too.  There have been some emotional times, maturing times and growing times, but I really am enjoying the teen years with them.  I love seeing the things they are doing, areas they are growing and fun they are having.

I’ve been reading and listening to some good books.  You can see what I’m reading here on my Goodreads site.  I also finally succumbed to it and I joined Pinterest.  I never wondered if I would like it, I knew I would, and I do.  I was just worried about getting sucked into it too much.  I can see how that could easily happen, but I’m trying to make sure it doesn’t.  😉

Sarah and Paulie just changed rooms, and though that sounds like an easy thing, it involved a lot of painting first.  Sarah’s room was purple when we first moved in this house, so she automatically got that room.  She was finally ready to move, so we painted it 3 times to cover up the purple!  It looks nice now, and Paulie doesn’t have to have purple walls in his ‘boy’ room.  lol

And just to show you some of the fun we have been having, this picture is of Paulie going down a 200 foot slide that our church set up for a fun church day.  Paul had to work, and Sarah and I didn’t make it down the slide, but Paulie had a blast.  🙂 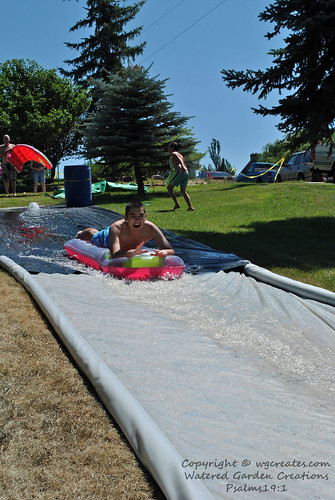 6 thoughts on “Is it really August 7th already?”

This site uses Akismet to reduce spam. Learn how your comment data is processed.